City Pig BBQ’s black-and-orange storefront on 8th Avenue doesn’t look like much. You might drive right past and not realize it’s actually a restaurant, save for the number of cars in the parking lot and the steady foot traffic in and out. Walk in, and you’ll be greeted by a smiling guy behind what looks like an unremarkable buffet line, replete with sneeze guards.


Owners Alan and Vernessa Davis plainly are not focusing on fancy. Giant paper towel rolls are on every table, the plates are Styrofoam, the utensils plastic. On the day when some fellow foodies and I visited, the liquor license hadn’t been approved yet, so Davis offered us “samples” of Budweiser gratis to accompany the meal. He didn’t even object when we asked him to let us bring in some emergency wine from the car trunk. 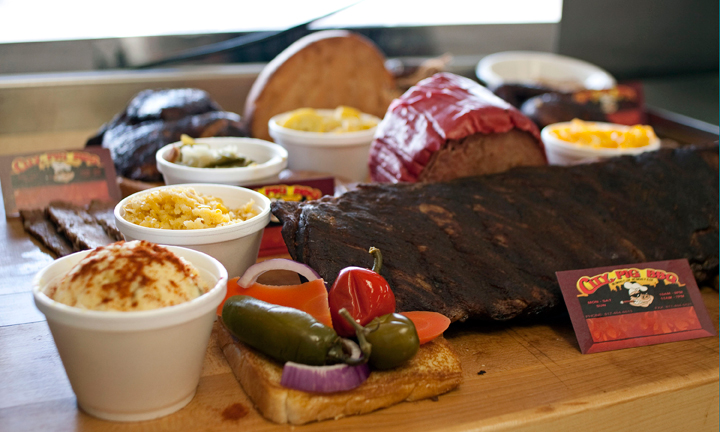 City Pig offers all the traditional stuff (ribs, brisket, smoked chicken) along with some oddities (cabrito when it’s “in season”). The chopped beef was excellent, not a scrap of fat in the meat. That happy, telltale smoke ring around the edge of the portion wasn’t discernible, but the meat was smoky enough and extremely moist, even without sauce. The pulled pork was tender, with a mild, barely smoky flavor. It also was so moist that it didn’t need any extra sauce. The smoked turkey was extremely salty. The diner with the salt-lick taste buds at the table liked it; the rest of us didn’t. The restaurant isn’t reeking in smoke smell, so you can eat there and not have your hair or clothes tell the tale. The staff said the smoker is “in back, in the kitchen.”

About the sauce: It’s thin and vinegary, like Memphis-style, but also sweet and spicy. If you like gloppy, sweet sauce, go elsewhere. The heat in City Pig’s version isn’t sneaky, just a moderate undertone.

City Pig offers three kinds of sausage: store-bought mild and spicy versions plus a homemade Polish kielbasa-like product that wasn’t great. If you’re trying to decide which to have on your sandwich, the server will offer samples. The mild sausage was good, but the spicy sausage was excellent, with the kind of heat that sneaks up on you. You actually might not notice that your mouth is burning until you’re halfway through your sandwich.

The sandwiches came on unremarkable white buns. The Texas toast served with the two-meat plate was better. It was slathered in butter and grilled just right. But you’re not going to City Pig for the bread. You’re going for the sauce, the ’cue, and the delightfully wide variety of homemade side dishes. The pinto beans had a slight kick, courtesy of some strategically placed jalapeños. The cheese in the mac ’n’ cheese was definitely not the out-of-a-box yellow processed goo. It was more of a mild béchamel (though a little more cheesiness would have been appreciated). The rice and broccoli casserole was interesting — mild and unremarkable at first but dense and colorful after a few bites. The winner of the evening? The green beans simmered with pork until they were soft, like collard greens. The beans had a lovely, smoky, salty kick. City Pig also offers several choices of cold sides, including potato salad and green-pea salad.

Besides location and the spicy/vinegary sauce, City Pig differs from most other ’cue joints in town by offering killer desserts. The sweet potato pie was smooth and sans traces of the fiber that sometimes pops up in scratch versions. It was mildly redolent of nutmeg and not too sweet, and even the diner who doesn’t like vegetable pies enjoyed what he tasted. The pecan pie was also excellent: gooey, also not overly sweet, and generously filled and topped with pecans. The cobbler of the night happened to be cherry, and it was fancied up with nutmeg and other spices inside wonderfully soft, flaky crust.