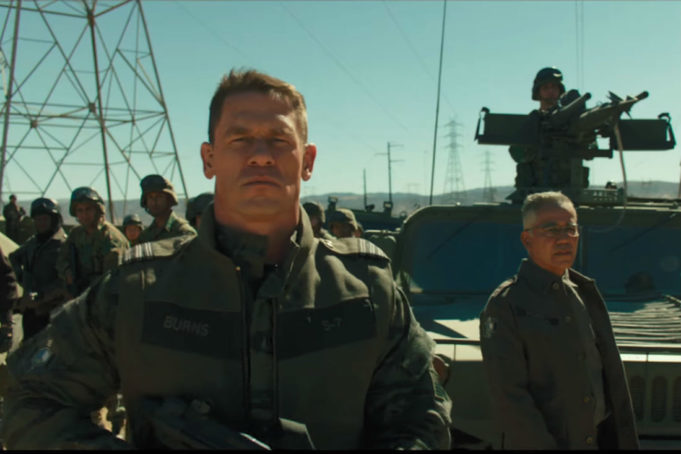 When I saw the trailer for Bumblebee some months ago, I was skeptical. Not just because all the previous Transformers movies have sucked, but also because the trailer seemed to show the movie using John Cena as a military-issue bad guy. That’s not the best use of him, I thought. Sure, he looks the part, but temperamentally, he’s not cut out to play evil. The only way I figured it could work would be if he were a funny villain.

I was happily surprised, then, when I actually saw Bumblebee this past weekend. Not only does it adopt a playful retro tone that the entire series should have adopted from the beginning, but it also casts Cena as a bumbler who’s duped into working for the bad guys for a while. He still gets to be funny, too. In my last post in this series, I promised I’d evaluate his career in the future, and here I am. (Stupidly, in that same post, I also ascribed to him a career as a Marine that he didn’t have. I’ve deleted that part of the piece, and I regret my error.)

Born in Massachusetts 41 years ago, he graduated from Springfield College and also played center for their Division III football team. With his degree in exercise physiology, he knew he was headed for a bodybuilding career. I have neither the time nor the inclination to follow pro wrestling, but it seems the wrestling world quickly (if not immediately) found a persona for him to play in the ring, that of a wholesome all-American hero for people to root for. A recent article in Sports Illustrated details this part of his career.

It made logical sense that the movies would try to translate his wrestling character to the big screen. It didn’t work, though: Check out the 2006 thriller The Marine and you’ll see him failing to show more expressive range than his plasticine action figure as a soldier who takes revenge after bad guys kidnap his wife. After another forgettable starring role in the 2009 action film 12 Rounds, his acting career petered out into direct-to-video stuff such as Legendary and Scooby-Doo! WrestleMania Mystery.

There it likely would have stayed if not for Trainwreck, a film in which he gleefully sent up his muscle-brained persona with an awkward sex scene speaking Mandarin to Amy Schumer and another scene in which he riffs on a guy in a movie theater telling him to be quiet. Many moviegoers left that film talking (rightly) about how funny LeBron James was in his comedic role, but it was Cena who fired off good lines (“I look like Mark Wahlberg ate Mark Wahlberg!”) and also gave a creditable performance as a guy who wants more from the relationship than Schumer’s alter ego is willing to give.

Later that same year, he proved his comic skills weren’t a one-off with brief but memorable appearances in both Sisters and Daddy’s Home as a stepdad who gives Mark Wahlberg the same brusque manlier-than-thou treatment that Wahlberg’s character has spent the entire movie giving to Will Ferrell. When he went back to action films, he didn’t leave his sense of humor behind: In Doug Liman’s underappreciated The Wall, he plays an ill-fated Army soldier in Iraq who spends hours lying prone with a sniper rifle on the hot desert sand, and when he finally gets up, he tells his fellow soldier, “My balls have melted and fused into one solid ball.” He had the lead voice role in the animated Ferdinand, but that movie’s PG rating seemed to hamstring him. Not so with Blockers, which I saw recently and found every bit as funny as I did this past spring. There he plays a weepy dad who’s proud of his teenage daughter but also not quite ready for her to grow up. It takes a lot to play a father trying to stop his daughter from losing her virginity and not have it come off as creepy, but he makes the character’s hysteria and squeamishness funny. I still crack up thinking about him accidentally spying on Gary Cole’s character during sex: “I locked eyes with him, and then he finished.” Now, in Bumblebee, his character is kind of a douche (as witnessed by the paintball game that introduces us to him), but he eventually gets on the right side when he’s given good information, and he’s not a total stooge about the giant robots who say they’re on our side. “They call themselves ‘Decepticons.’ Does that not raise a red flag with anyone?”

Offscreen, the actor seems to be a down-to-earth guy who does a great deal of charity work for the Make a Wish Foundation. I find it just as laudable what he doesn’t do; earlier this year, he refused to take part in a WWE event in Saudi Arabia after details came to light about the royal family-sanctioned murder of journalist Jamal Khashoggi. (As my friend and fellow Weekly writer GP Kennedy joked, it would have been cute if WWE had brought Jim “Hacksaw” Duggan out of retirement for that event.) Where his fellow WWE product Dwayne Johnson has established himself as an action hero who can be funny, Cena is a more skilled comic actor who can also do action. I’m glad we have him.