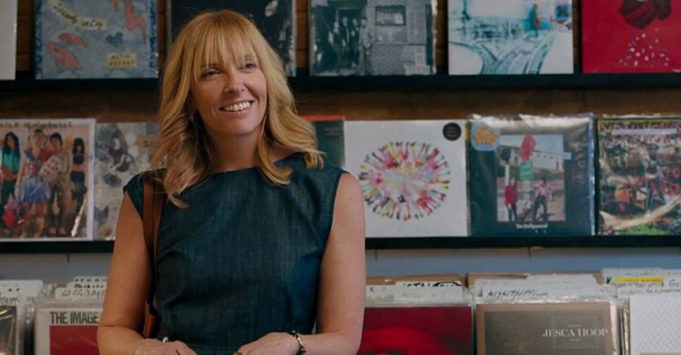 Two months ago, I saw Toni Collette tear up the screen as a grieving mother who sees supernatural forces preying on her family in Hereditary. Then this week, she’s in Hearts Beat Loud, where she comes a distant fourth behind Nick Offerman, Kiersey Clemons, and Sasha Lane. (Depending on how much Jeff Tweedy’s cameo role late in the film matters to you, she might be fifth.) With that in mind, I thought I’d look back over a career that has dazzled and frustrated me.

The Sydney native is 45 years old, having been born with the surname of Collett and later adding the “e” on the end of it. In only her second film appearance, she gained worldwide attention for Muriel’s Wedding. She gained 40 pounds to play the title role, a social misfit from a northern Australian hick town called Porpoise Spit. (“Spit” in this case means “point of land projecting into the sea” rather than “saliva,” but the movie still makes the point that the town is crap.) Muriel thinks that marrying a man will be her ultimate source of bliss, but the real person she falls in love with is Rhonda (Rachel Griffiths), her one friend from Porpoise Spit who believes in her, shares her love of ABBA songs, and moves to Sydney with her to live it up. Muriel’s Wedding was part of an influx of Australian movies in the mid-1990s (along with Strictly Ballroom and The Adventures of Priscilla, Queen of the Desert) that charmed English-speaking audiences with their unabashed eccentricity and romanticism. It also had this famous scene:

Collette put on an English accent to play the mousy friend whom Gwyneth Paltrow mentors and condescends to in the Jane Austen adaptation Emma, but she delivered something far deeper in one of the great underappreciated workplace comedies, Clockwatchers. Jill and Karen Sprecher’s 1997 film surveyed a soulless corporate landscape with piped-in Muzak, and Collette’s Iris wound up as their film’s moral center, bearing witness as her fellow office temps (one of them Parker Posey at peak 1990s Parker Poseyosity) go insane with boredom and having bosses who can’t tell them apart, even though they look nothing like one another. As a string of escalating thefts roils the office, Iris keeps her equilibrium and eventually rights a terrible minor injustice, while owning the real culprit without saying a word.

In retrospect, the role that got her her single Oscar nomination was also an albatross. The Sixth Sense owed a great deal to the performances by Bruce Willis, Haley Joel Osment, and her that cut through what could have been a treacly script by M. Night Shyamalan. Her Lynn Sear cuts a compelling figure, a mother who knows something’s wrong with her child but not what it is, and who fights fiercely to protect her son when she thinks he’s being abused, even though she can barely keep herself together.

That Oscar nomination should have given her a career like her compatriot Nicole Kidman’s, but instead it pigeonholed her as a mom when she was all of 25. A string of mother roles stretched out before her, the chronically depressed mother of Nicholas Hoult in About a Boy, the repressed mom attracted to other women in The Hours, the put-upon mom dealing with Abigail Breslin and dysfunctional men in Little Miss Sunshine, the divorced mother who attracts abusive men in The Way Way Back. The performances and the movies themselves grew relentlessly dreary.

Through it all were signs that the weird, idiosyncratic Collette was still in there, especially in the 2006 drama The Night Listener, where she plays a blind and severely disturbed adoptive mother who clings to her version of the truth even as her story about a dying son who was raped by a ring of pedophiles starts to unravel.

I can’t help but wonder what might have been different if not for two roles that she missed out on that would have showcased her musical talents. She auditioned for the part of Roxie Hart in Chicago, and her audition tape reportedly dazzled everyone who saw it. The casting of Renée Zellweger in the role instead was defensible on box-office grounds, with Zellweger coming off her own Oscar nomination for Bridget Jones’s Diary and a film musical still being thought of as a gamble back then. Still, I can’t shake the gross feeling that Chicago producer Harvey Weinstein made that decision on the grounds that Zellweger gave him the bigger erection.

The other role she missed out on was Mrs. Lovett in Sweeney Todd, and while Helena Bonham-Carter (the director’s wife) did a fine job playing the widow, there’s no question Collette would have bettered her in the singing department. As it is, the only role that has allowed her to show off her skills has been in Connie and Carla, and for the 10 of you who watched that movie, I’m sorry I reminded you.

It’s tempting to wonder what might have happened had Collette gotten either of those roles, but the fact remains that her taste in roles has always been patchy (her recent work has included Krampus and the latest XXX sequel). Even in better films like Enough Said and The Dead Girl, she has been overly reticent, not demonstrating the ability to take over scenes from a supporting perch. It seems she can’t deliver the sort of heaven-storming performance that she’s capable of unless she’s fully engaged. That has been too seldom, and the blame for that lies between her and the filmmakers who haven’t given her roles suited to her blazing personality. Maybe she should get together with fellow Aussie Jennifer Kent on some scorching follow-up to The Babadook. Let’s hope that something of that nature gives Collette the attention she has long deserved.